There is a visible floor and it is flawed and beautiful, just like everything that is good in life. The floor joists themselves are nestled within a perfect square, but as we have already mourned and now rejoist, I mean, rejoice, the support beams are slightly outside of the perimeter. It is just one of those things that we now understand and would never do incorrectly again.

For all of you rookie framers, Perriee and I had a great lesson regarding our measurements of the floor joists. Some of you might say, “DUH”, and some of you will think, “Huh, I’ve never thought about that!” Although the plans called for 14 ft lumber to construct the joists, we ultimately realized that to make a 14 foot square, those joists are actually required to be 13 feet and 9 inches long. You know why? To make a square. Why wouldn’t they be 13 feet and 8 inches long, since the boards we used are called 2x8x14s? I’ll tell you why! Because when someone tells you lumber is 2 inches wide, it is probably 1.5 inches wide. Sneaky contractors want to keep us armatures out of their lane!

Carriage bolts: We ended up stopping for 9 more and put two bolts per post. We took two lag bolts out of one side and used those holes for the carriage bolts and left the lag bolts on the other side, where they were originally. It feels good and solid.

Since this weekend has passed, I have been looking deep into our plans, calculating lumber for the loft and bathroom on the INSIDE of the cabin. We had another consult with neighbor Mark to iron out and clarify our framing steps and we are committing to a save the date weekend and have extended the invitation to a couple of people who have expressed interest in helping with the “Barn Raising”. 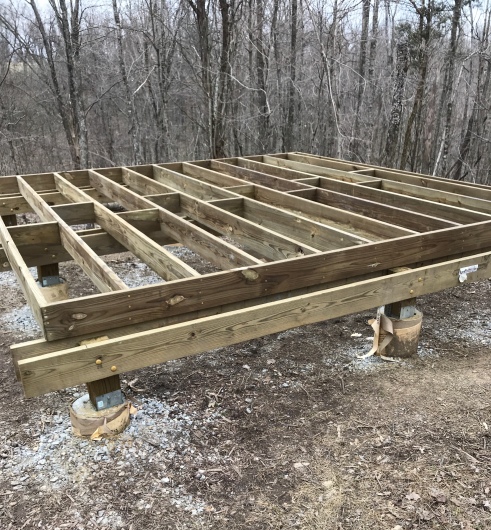 A year ago when we looked at the plans for this, I seriously did not know if we could hack it. Now we surprise ourselves about the things we understand.

Life in the City

On the city home front we have started some seeds in the house and planted some things outside in our new raised beds. Spring is coming. The earth is getting ready to exhale a big warm breath of new life. Bring it on.

I am quite sure that I am a slow learner. In order for me to retain something, I often need things explained to me several times. I like to write things down.  Sometimes I like to watch someone demonstrate something, then have them direct me to do it, step-by-step.  One thing is for certain though, once I learn something, I know it.

Don’t be afraid to ask questions, even if you feel like you are being bothersome (who cares?). This might be due to my cisgender, female brain, and I will try to fight it, every step of the way. A quick Google search returned the following link, so no, I don’t think I’m making this up: Women Ask Fewer Questions Than Men

Published by Marietta and Perriee

View all posts by Marietta and Perriee